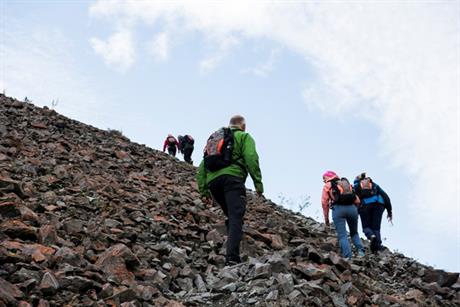 Tracking the Heroes of Telemark

The saboteur route is the world-famous trail the Norwegian resistance used during World War II hiking and cross-country skiing in subzero temperatures across the Hardangervidda plateau. The mission was to assault Vemork, a hydroelectric power plant outside the town of Rjukan. At the time Vemork, was the first plant in the world to mass-produce heavy water and the target of a sabotage operation led by Allied forces in February of 1943.

Groups are guided by Brave along the last part of the original saboteur route, down a steep river gorge and up towards the old railway tracks leading to the Vemork museum. The trail has rope sections, where participants climb down towards the river Måna, crossing the river and moving up towards the slope to the top of the railway tracks. Along the trail Brave guides participants through a timeline of the most celebrated commando raid in World War II history. At the top of the slope a warm local lunch will be served, before participants walk to Vemork museum for a sightseeing and a visit to the Heavy Water Basement. Brave guides year-round and cater to all types of private and tourist groups.

The sabotage operation led by the men in Gunnerside, with no shots fired and no saboteurs wounded – is applauded around the world as a stunt that thwarted the Nazi nuclear project and ended the war. Be Brave and join us for an adventure in the heartland of Telemark, Norway.

Suitable for: participants of 8 years and older

Starting point: a small gravel pocket on the left side of FV37.