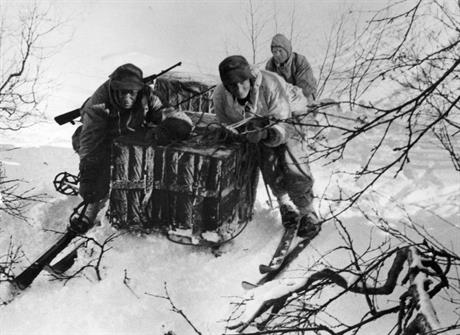 During the WWII Vemork in Rjukan was in focus for their production of heavy water. The heavy water war stopped the Germans in developing the atom bomb.

If the Germans had been allowed to continue their heavy water research, they might well have been in a position to build an atomic bomb.

This was the impression the allied scientists had, whilst the Second World War was under full development. An atomic bomb could have led to the Allies losing the War.

The allied scientists themselves were working round the clock on trying to create a nuclear explosion based on other principles, but they still had a long way to go. And the only source of heavy water was in German-occupied Norway, at Vemork, in Rjukan.

The sabotage operations which were designed to prevent the Germans from obtaining heavy water are some of the most daring and exciting deeds of the Second World War.

It all began in March in 1942 when a lone parachutist was dropped to gather knowledge about the production of heavy water. On October the 19th, four other Norwegians were dropped near Sognadalen, just west of Rjukan. They were all local boys and knew the area well. Their task was to prepare the sabotage operation and to send radio messages to England. The group had the code name "Grouse".

The Grouse group's journey to their planned headquarters was a hard one. They were cut off from the outside world for ages while they waited for new accumulators for the radio station.

A month later, on November the 19th in 1942, a British sabotage group of 34 specially trained men was dispatched from England. Their task was to attack the heavy water plant at Vemork and destroy it. The Grouse group was to act as a reception committee and prepare the landing at Skoland near Lake Møsvatn.

But then disaster struck. The men had been transported in gliders and one of the planes and the glider it was towing crashed into a mountain. The other glider failed to land properly after being released, killing some of its occupants, and the Germans shot the survivors.

In spite of this setback, the Grouse group consisted, although they had changed their name to "Swallow". They were forced to spend the winter hiding in the harsh wilderness of the Hardangervidda mountain plateau, eating what was left of their rations, and supplementing their diet with wild reindeer meat. They even ate the contents of the reindeers' stomachs in order to obtain essential nutrients.

On February the 16th in 1943, a new group of young Norwegians specially trained for the mission landed on the Hardangervidda mountain plateau. They landed 50 km from their intended destination and walked straight into a blizzard. It took several days before the 6 members of the new "Gunnerside" group were able to join forces with the former Grouse group, now renamed Swallow.

On the evening of February the 23rd, the saboteurs were in Fjøsbudalen, just north of the plant at Vemork, getting ready to strike.

They began the dangerous and exhausting descent, crossing the gorge running down to the heavy water plant and cutting through the fence with wire clippers.

The cover party took up their positions and the sabotage group made their way swiftly to the target.

They placed explosive charges on the heavy water containers, destroying most of them. Oddly enough, none of the German guards on duty noticed anything until it was over.

By that time, however, the saboteurs were long gone on their trip up to the mountains, speeding their way along the old work roads under Krossobanen. The snow lay deep and it was getting very dark. It was a hard trip, but they all made it back safely.

The group split up into two groups after a rest. One group was fully armed and in uniform and they skied all the way across Norway to the safety of Sweden.

The other group spread out and hid all over the Hardangervidda mountain plateau. Three thousand Germans surrounded the area and combed the wilderness in an attempt to track them down, but they failed to catch any of the saboteurs. The radio station maintained contact with Allied Command in London right up until the end of the war.

The Germans, however, rebuilt the heavy water plant. The Americans considered this so dangerous that they decided to bomb the factory. On November the 16th in 1943, 160 Flying Fortresses flew in over Rjukan and bombed Vemork, the power station and the factory.

The Germans were forced to abandon their plans for producing heavy water, but the raid claimed more than 20 Norwegian lives.

Later on, the saboteurs found out that the Germans were intending to move their stocks of semi processed heavy water from Rjukan to Germany. Orders were received from London to destroy the heavy water shipment at all costs and by any means.

The weakest link in the transport chain was the ferry carrying the train across Lake Tinnsjø. The night before the ferry was due to sail, the saboteurs managed to place a time charge on board in the bow.

On Sunday, February the 20th in 1944, when the "Hydro" was half way across the lake, there was an explosion and the ferry sank within minutes, taking the vital heavy water down with it to rest at a depth of 460 metres. Four Germans and fourteen Norwegians perished, but the battle for heavy water was now finally over in Norway.