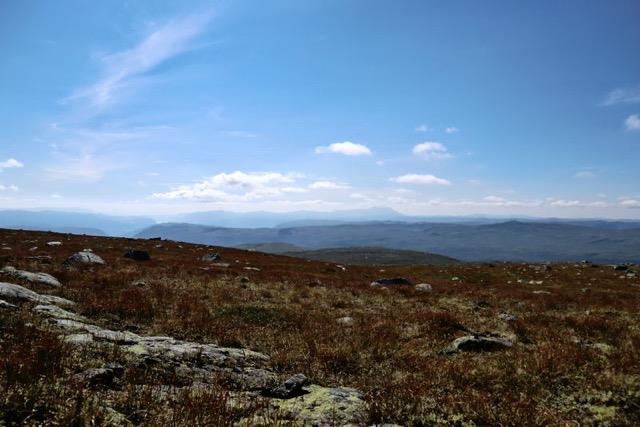 Borgsjåbrotet is a nice top hike, starting from Småroi Mountain Lodge. At the Borgsjåbrotet, it resembles wreckage after an air crash.

Access: Drive from Tinn Austbygd up through the whole of Tessungdalen and up towards the mountain crossing to Uvdal (Imingen) almost to Småroi Mountain Lodge. Småroi Fjellstue has no sign, but is located in the first hut you come to on the mountain.

The path begins to the right of Borgåe where it crosses the road on the opposite side of the parking lot. When you stand with your back to the mountain Gavlen (closest) and look inward, you see three peaks. The largest and backmost in the middle is the Borgsjåbrotet.

Follow the trail all the way and you will come to a green roofed cottage. Shortly before the cabin, turn off to the right and follow the path inwards and upwards. Now you go in the direction of Lufsjå and Store Normannslepa. (Snowshoe Thompson Trail).

You can also go straight up, but then you will be in rough terrain. As you follow the path to the right a little way up, you will come to a large boulder. Shortly before the quarry, you leave the trail and turn left and walk uphill in the hillside towards the two peaks. Here you will see a warden on a peak. Follow the signs until you come to the wreckage of a military plane that crashed here in 1954.

From the airplane there is a path straight up and then you have the Borgsjåbrotet in front of you. First you come to a surface with a belt of large stones. This crosses you and goes straight up to the top.

When you reach the top it is completely flat and in the middle stands a warden. From the top you can clearly see Lufsjå, Hårteigen, Hallingskarvet and Gaustatoppen.

The first section follows a path that is easy to walk and not steep. Gradually it rises a little more and you have to cross a bit in myrtle terrain where you have to tread on stones to avoid water - a little dependent on water flow. Then the path gradually becomes more ascending and some distance up one has to leave the path and walk in heather and the like. on the way to the rocket. From here the path goes again and the last stretch to the top is somewhat steep but not difficult.

Length: about 8 km (round trip)

The airplane on the Borgsjåbrotet

A fighter jet on exercise crashed in the hillside below the Borgsjåbrotet in 1954. There were several aircraft and two of them would take an extra round over the Tessungdalen when it suddenly got into trouble and probably lost some of the tail piece. As the plane began to lose altitude, it dropped its wing tanks over Tessungdalen and tried to get over Borgsjåbrotet. This failed and the aircraft steered down the top and was crushed into small pieces. The 24-year-old pilot who was alone in the plane was killed instantly.

Several of the residents of Tessungdalen were able to follow the course of events from home. Most of the wreckage was removed, but many small debris is now spread over an area of ​​approx. 150 x 300 m.

A monument of wreckage has been erected painted a white cross and the seat of the aircraft stands as a memorial to the pilot. Småroi Hyttelag has created a steel memory box containing a description of the incident, pictures of the pilot and the aircraft and various newspaper articles describing the incident.

There is also a guest book that you can write in when you have visited the memory space.